URISA Alberta was formed in 1988 as a provincial chapter of URISA International, one of the longest-running Information Systems organizations in the world. The Alberta Chapter is separate from the international organization and has its own membership and fees.

URISA began in the U.S. in 1963. It is a non-profit organization focused on Technology education and issues, most recently focusing on all aspects of the geospatial industry. There are over 3000 members internationally with sister organizations in Asia, Australia and Europe. There are 24 Regional Chapters, primary in U.S. and Canada.

Executive officers are elected and normally serve a two-year term. Along with the President, URISA Alberta has two Vice Presidents (VP North and VP South), who participate in any conference planning activities, a Program Chair who coordinates and delivers the yearly program, a Publicity Chair who is responsible for advertising and promoting the chapter, a Treasurer and a Secretary. URISA Alberta also has a Member-at-Large and an Academic Liaison to assist with chapter activities and outreach.

Our very own Dianne Haley has won the prestigious Horwood Distinguished Service Award from URISA at the GISPro Conference 2017 in Toronto. This is an ultimate award given for long-term service to URISA and the profession. It is named after founding member and first URISA President, Edgar Horwood who was an early pioneer in the field of information systems for local government. Past recipients include Jack Dangermond (founder of ESRI Canada) and Barry Wellar (Emeritus Professor, University of Ottawa). 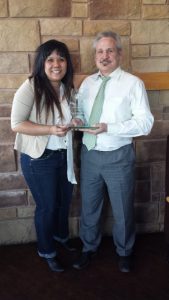 The table below contains the complete history of the Presidents of the Alberta Chapter of the Urban and Regional Information Systems Association.