Our very own Dianne Haley has won the prestigious Horwood Distinguished Service Award from URISA at the GISPro Conference 2017 in Toronto. 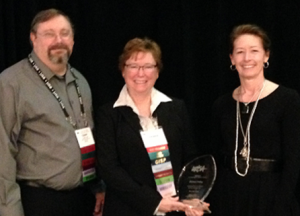 This is an ultimate award given for long-term service to URISA and the profession. It is named after founding member and first URISA President, Edgar Horwood who was an early pioneer in the field of information systems for local government. Past recipients include Jack Dangermond (founder of ESRI Canada) and Barry Wellar (Emeritus Professor, University of Ottawa).